Tim Hall, Dean of Howard College of Arts and Sciences at Samford University, took part in our Spanish immersion program in Antigua, Guatemala. He and his wife decided to travel to the Central American gem to learn about the country and culture, and how it compares to their usual destination — Mexico.

While Tim participated in group and private Spanish courses, his wife completed her TEFL certification. Together, they developed new skills while traveling and discovering all Guatemala has to offer. Read about his experience as a Spanish immersion student at Maximo Nivel Guatemala. 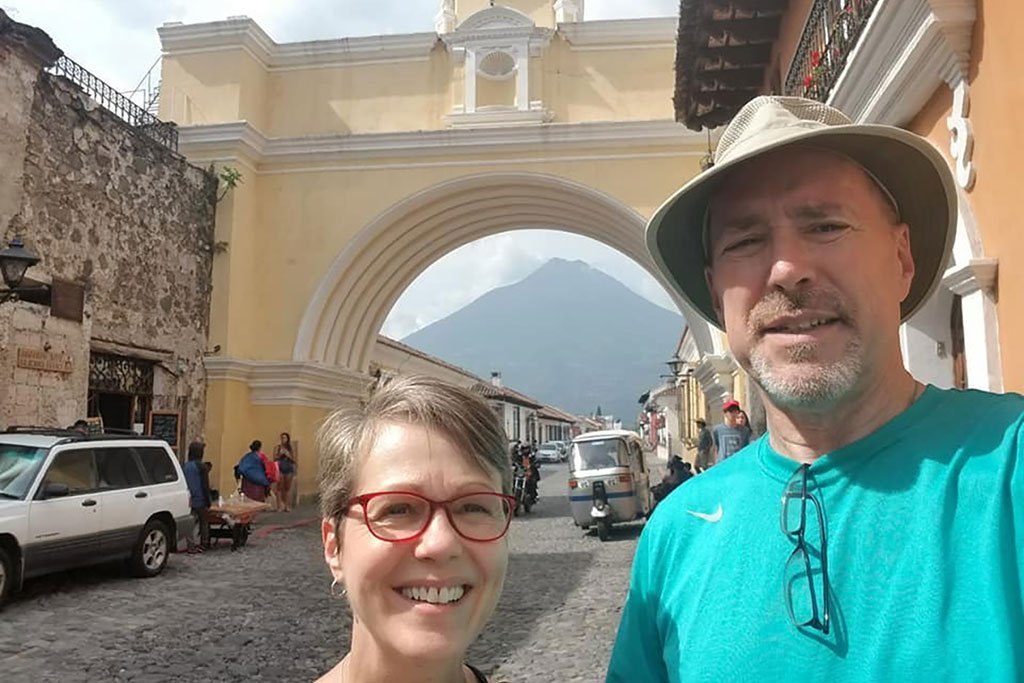 Have you studied a foreign language in the past? Which language and how long did you study?

Yes, Spanish first in high school for a year or so. I studied Greek for probably 6 years total, Hebrew for 3 years, and French for reading for about 6 months—the latter just enough to pass a language qualifying exam for grad school. I studied Dutch via Rosetta Stone for about a year when I was preparing to live in the Netherlands for half a year.

I came back to Spanish when my role in developing a partnership between my university and Benemérita Universidad Autonoma de Puebla took me to Puebla, Mexico a number of times and I decided I needed to learn better Spanish in order to communicate with my exchange partners. Since then, I have studied in intensive immersion programs every summer for 5 years, for 2 weeks at a time, then used various computer-based tools to work on the language for the rest of the year. For the past couple of years, I’ve used Duolingo.

My current university has a “Mesa de Español” on Fridays where I meet to converse with colleagues in Spanish and thus keep it up.

What is the motivation for wanting to advance your Spanish?

Initially, it was to improve my ability to communicate with exchange partners in Puebla, Mexico, but it has since expanded. My wife Sheree and I love Latin American culture and travel to Latin America at least once per year. Being able to speak Spanish helps us get around and visit places we otherwise might not. I’m planning to retire in about 6 years, and we hope to live at least part of each year after in a Latin American country. We’re still leaning most strongly toward Puebla, Mexico, but we’re still exploring.

Do you think it’s important for native English speakers to learn another language? Why?

Yes, it definitely is. Having lived for half a year in the Netherlands, I saw the benefit of being bi- or multilingual. It has great practical value merely in helping navigate daily life in another country. It demonstrates respect for our friends from other places and helps us develop deeper relationships with them. It helps us understand other cultures much better—not only the mere words they use but the meanings behind those words, the culture within which they are used, and which gives rise to them. There are also, of course, important neurological benefits, which I take ever more seriously as I get older. 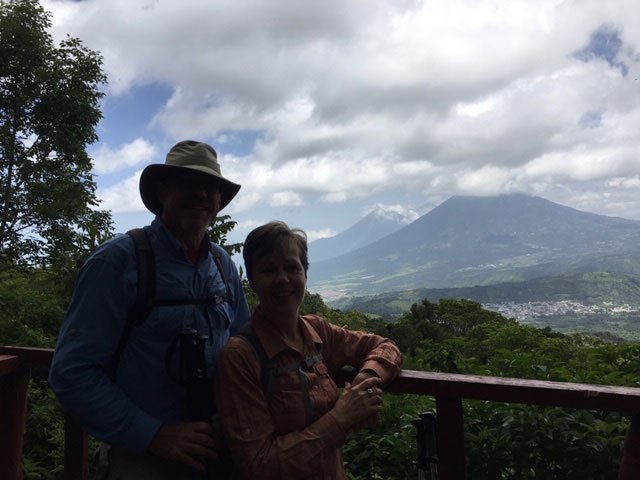 Do you think the U.S should promote Spanish as a second language for more individuals? Why?

Yes, I definitely do. For one thing, we are already practically a bi-lingual society. It doesn’t do for us to ignore that or try to suppress it. I think there is a woeful misunderstanding of Latin American culture in the United States and I really do believe that one important way of overcoming some of the rank prejudice among majority-culture Americans will be to promote the kind of deep understanding that only language study can provide. I think we can only gain from better communication—not only understanding but making ourselves understood. Plus, it’s fun and satisfying to express oneself in another language and to know what’s being said and sung.

Why did you choose to study in Guatemala?

Frankly, we chose Guatemala this time around primarily because Sheree had researched schools for Teaching English as a Foreign Language and found that Maximo Nivel’s TEFL program both has a great reputation and is very affordable in Guatemala. Also, we have been visiting various Latin American countries—Mexico several times as well as Ecuador, Peru, and the Dominican Republic—but we hadn’t visited Central America. We were curious about Guatemala, so we came to learn more about it.

Was there anything that surprised you about the way Spanish is taught at Maximo Nivel?

Not really. The structure of the program is similar to what we found at other schools. Perhaps the one difference was the quality of the materials provided—they are really superior.

How did you connect with your teacher?

I connected very well with all three of my teachers. They were really interesting people, took an interest in me, and pushed me to learn well. I also think they are the best teachers I have studied with of all the schools I have attended, and Maximo Nivel is the fourth such. The school obviously prizes superior teaching and learning and recruits strong teachers.

Describe your experience taking both group and private classes.

What I like about group classes is the ability to have a larger conversation with more people, to learn from others and to help them. The drawback of group classes is that the teacher sometimes struggles to find a level where everyone can progress at a good rate. Someone is making a little slower progress; someone else is struggling to keep up.

Private classes, of course, overcome the second problem: a student can progress at her or his optimum rate. Learning is pretty dependent on the rapport that develops between the student and the teacher. I expect the teacher finds it a challenge to keep the student engaged, but I felt that my teachers did a pretty good job of that. I was very entertained by our conversations and particularly Rafael’s stories. 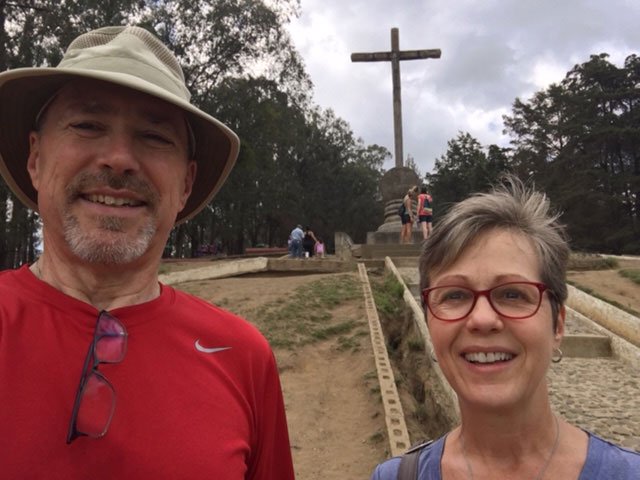 How does the campus itself encourage you to continue speaking Spanish outside of the classroom?

Well, that’s the one place where Maximo Nivel was not quite as effective as some of the other schools I have attended where the rule was “all Spanish all the time.” One school even had a bell hung in the break area that students were encouraged to ring when they heard English being spoken.

I attributed Maximo Nivel’s policy to the fact they also have a lot of local students learning English, so having English spoken in break areas is actually beneficial to those students. So it’s a balancing act I guess. However, the campus does have a lot of spaces to sit and converse, so if you want to speak Spanish informally you can.

Do you think an immersion experience is a more effective way to learn a new language?

Yes, of course. It develops both learning and speaking abilities much faster. This time around, I actually found myself thinking in Spanish while walking home from lessons. It promotes better and more contextualized understanding also. It’s practical and real-world—a student can use what’s learned immediately and reinforce it a lot more effectively.

Where and with whom did you use Spanish most while in Antigua?

I spoke most with my teachers at school, where I was studying 6 hours a day. I did use the language in shopping and dining as well.

Why did you choose an Airbnb over a host family accommodation?

Maybe 4 reasons: Sheree was not studying Spanish and needed extended study time; we’ve done host family before and found it a little weird at our age; Sheree, in particular, feels the need to rest her mind after an intensive day of Spanish study; and Airbnb is easier on the budget.

I’m sure staying with a host family would have probably allowed me to advance my Spanish skills at a much faster rate, but it’s a tradeoff. Still, I’m happy with the progress I made.

What was one thing that surprised you about Antigua, or Guatemala, overall?

Not a lot surprised me. In many ways, it’s similar to Mexico—probably more Oaxaca than Puebla. It’s significantly less developed. That’s not a surprise, but it’s noticeable. I enjoyed our overnight in San Marcos on Lake Atitlán and that was an enchanting place. A real surprise was the number of expats who traveled to Guatemala and the number who decided to stay once they arrived. 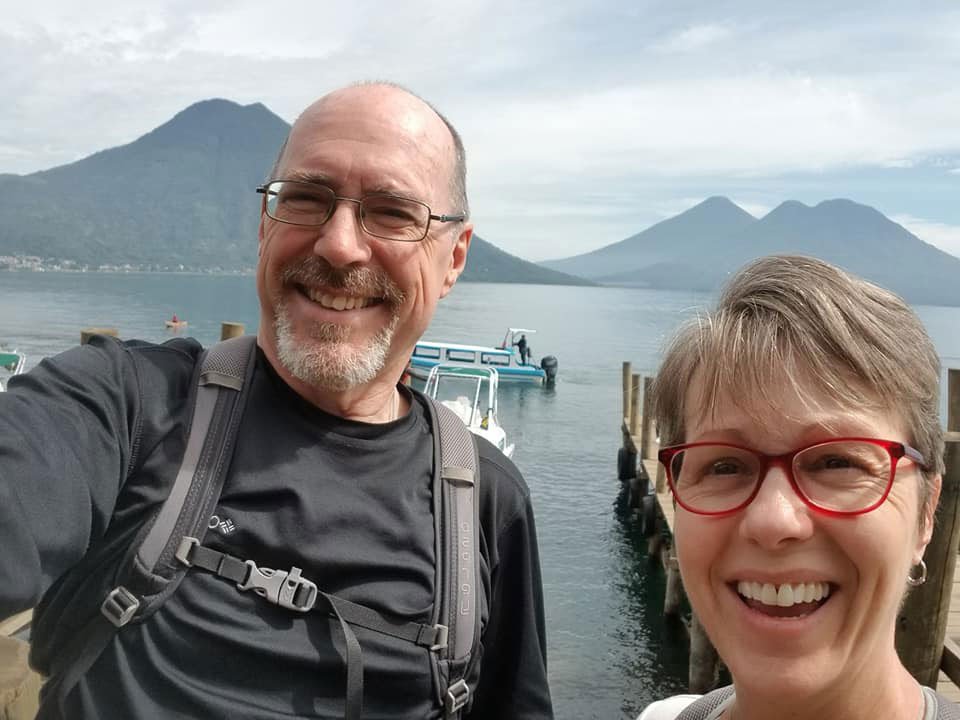 Were you able to explore/visit any famous destinations?

Yes, Volcán Pacaya and Lake Atitlán. I would highly recommend both.

What are your recommendations/advice for anyone interested in learning Spanish through an immersion program?

Well, I’d definitely recommend Maximo Nivel Antigua! Beyond that, I guess I’d just recommend that people do their homework—look for reviews, read the reviews about the strengths and weaknesses, look at the qualifications of the instructors and what people say about them. If your circumstances allow, and if you want the full immersion experience – try a homestay.

Find interesting, culturally rich places to study. That’s another thing that has really been valuable to us. We’ve chosen schools located in cultural centers with rich histories and I think we’ve gained a great deal from that. There’s so much to learn about and talk about in Antigua and places like it.