The Inca Empire arose from the highlands of Peru, and quickly expanded to include parts of modern day Ecuador, Bolivia, Argentina, Chile and Colombia. Inti, the Sun God, was recognized as a national patron throughout the Inca state as they relied heavily on the Sun’s warmth and nourishment to grow crops which sustained the villages. As a form of worship and respect, every province was mandated to dedicate at least a third of their land and herds to Inti, with each major province dedicating an intricately constructed Sun Temple. 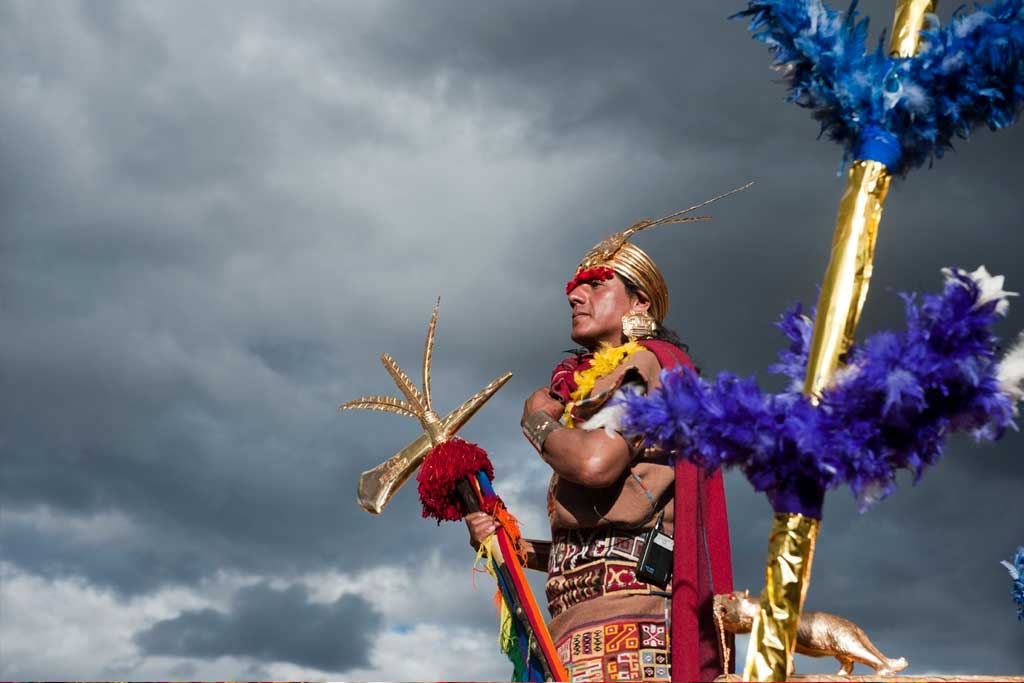 The Inca Empire also held various festivals to honor Inti, the biggest being Inti Raymi (Quechua for “Sun festival”), which concluded the harvest year. Inti Raymi began in 1412 in the Inca capital, modern day Cusco, Peru. Cusco was the business, political, and military center of the empire, and maintained the most extravagant Sun Temple of the state, Qorikancha. Qorikancha’s interior and exterior walls were lined with sheets of gold, and studded with emeralds. Inside the temple sat a gold statue of a small boy, a representation of Inti, encrusted with jewels. 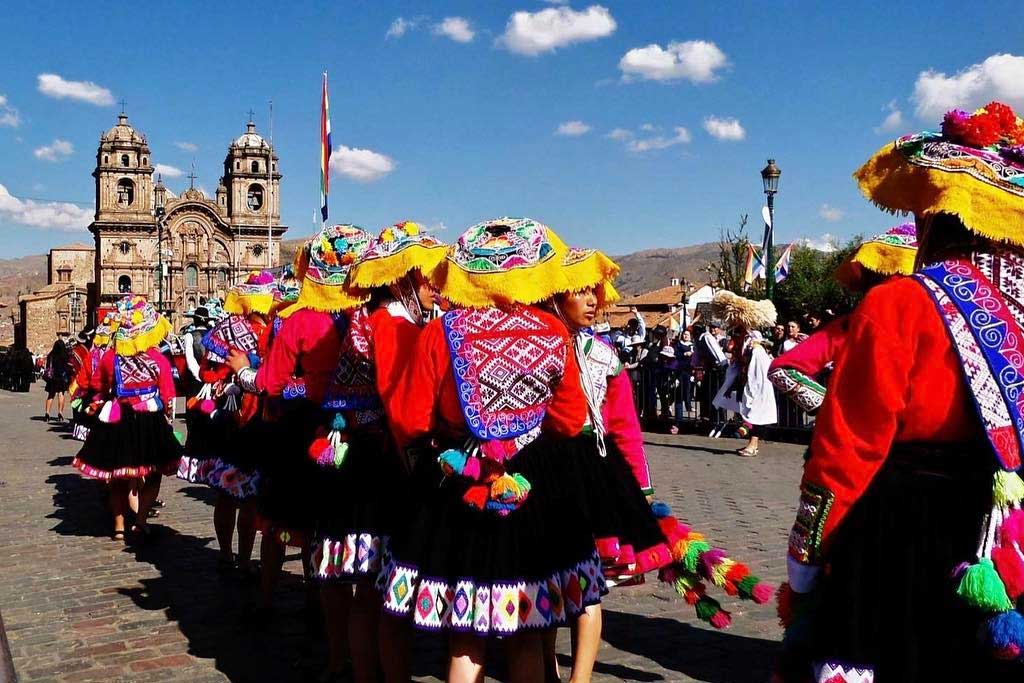 Inti Raymi took place every year on June 24th which marks winter solstice–the day the Sun is furthest from the Earth–in the Southern hemisphere. The tribes would gather from each corner of the state to the capital of Cusco to perform rituals, including the sacrifice of llamas, in hopes that Inti would return to bless the people with its warmth and light, give life to crops, and thus save them from starvation. Unfortunately, the tradition only lasted until the Spanish conquered the state in the 1535.

The Spanish desecrated the lavish Temples, stripping them of the gold and jewels, and banned all celebrations of Inti Raymi, deeming it a Pagan ritual not recognized by the Catholic Church. However, that didn’t stop the indigenous Inca tribes from partaking in small underground celebrations every year until Inti Raymi was officially reinstated throughout the country in 1944. 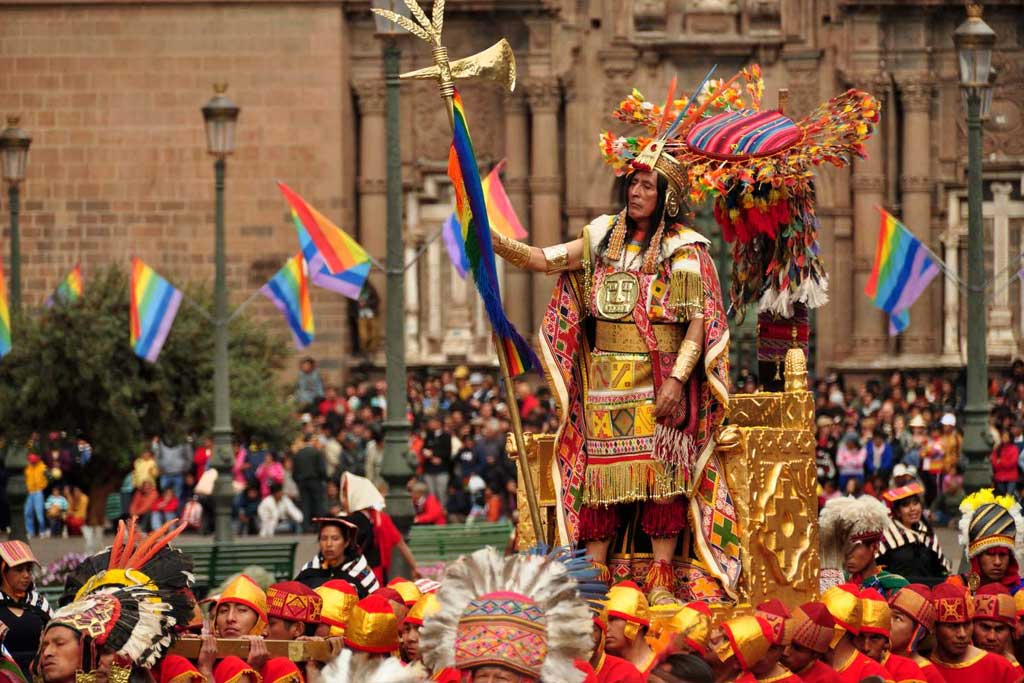 Today, Qorikancha’s ruins can still be found in Cusco’s center across the street from Maximo Nivel, and still acts as the starting point of Inti Raymi. The Incas left no written documentation, and therefore, re-enactments were carefully pieced together utilizing oral histories and chronicles of the Spanish conquest. Over 500 Cusqueno actors, made up of university students, professionals, and community organizers, begin preparing months in advance, reciting lines from traditional folklore and performing ritualistic dances in elaborate costumes. Celebrations take place the entire month of June and are filled with processions, parades, organized dancing, food, outdoor concerts, and more.

For the main event on June 24th, processions begin with the four corners–the empire was divided into four groups–each emerging from their respective corners and intersecting at Qorikancha. Today’s recreation sees actors dressed in traditional attire for their grand entrance as the ceremony unfolds. Here, the Sapa Inca (Inca King) makes a blessing to the Sun, and he and the Inca Queen, Mama Occlo, are then carried on a regal throne following the procession through the Plaza de Armas, and up to the ancient fortress of Sacsayhuamán, situated on the hills just above Cusco. The streets come alive with flower-covered streets, live music and dancing, and women with brooms who sweep away evil spirits. 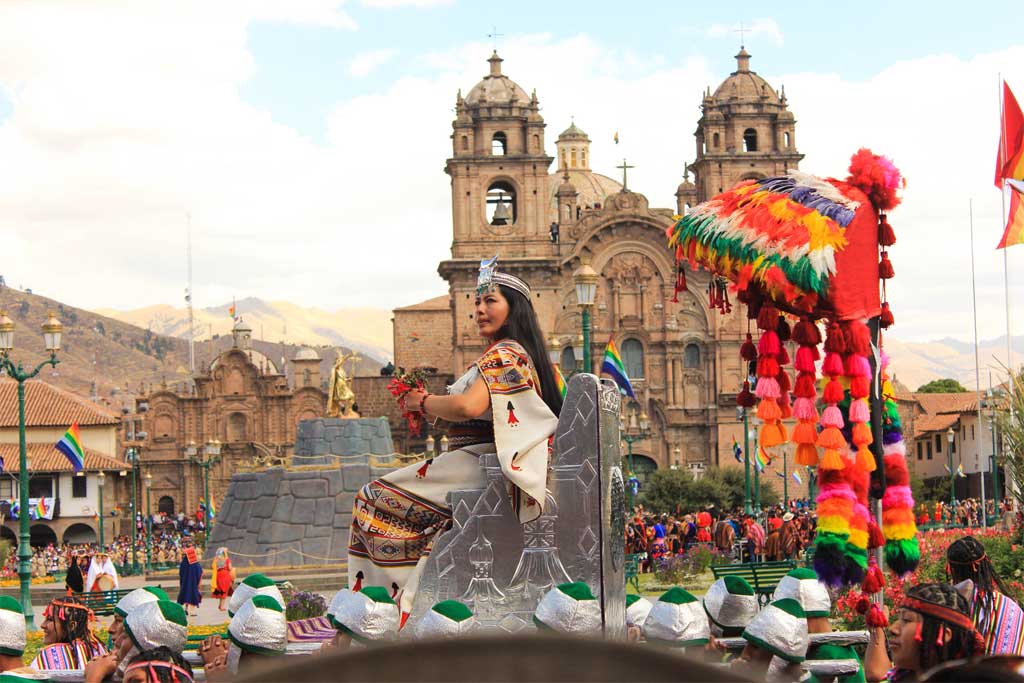 When they finally arrive to Sacsayhuamán, Sapa Inca takes the main stage where the sacred altar lies to give a speech to the onlookers followed by representatives from each of the remaining four corners. The re-enactment of the sacrifice of the llama then takes place, with the removal of its heart to honor the fertility of Pachamama, Mother Earth. The future of Inca is said to be held in the bloodstained heart of the llama. 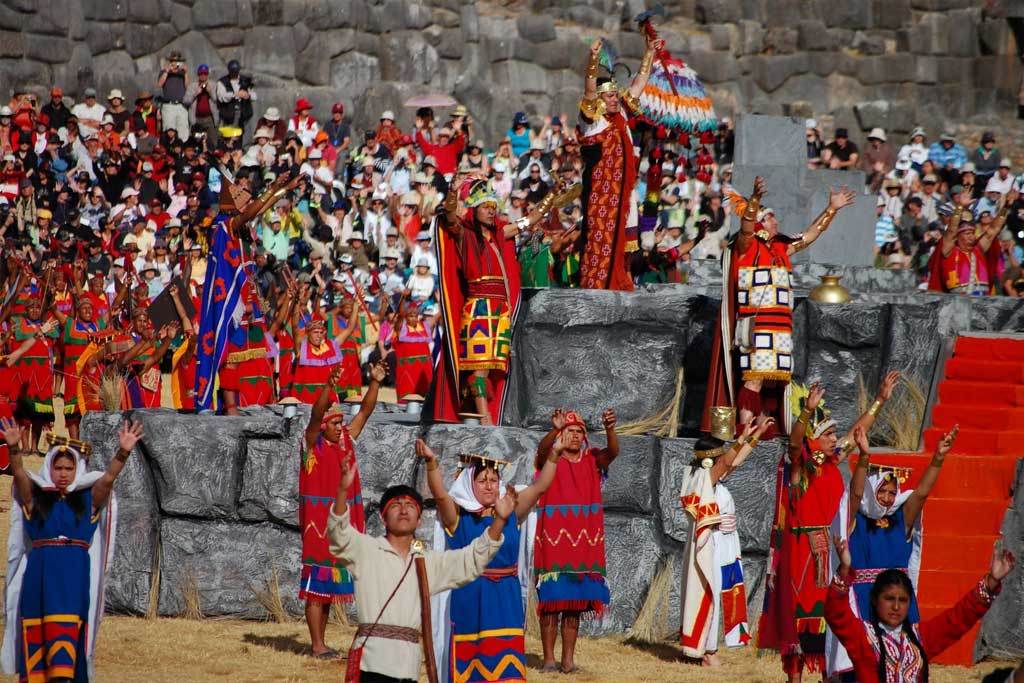 Finally, the procession ends with a trip back to Cusco, the king and queen carried on their thrones, and the priests and four corner representatives provide blessings to the people. The music, dancing, and feasts continue well into the night, welcoming a new harvest and the Inca New Year.